Summary: Most product teams have a mandate to put the user first. Based on the state of the web, that seems more like empty lip service than a serious design principle. But I believe truly user-centric digital product design is possible.

Tech product teams everywhere talk about ‘user-centered design’. Yet so many of today’s digital products are transparently anti-user.

It’s not just that companies aren't prioritizing user-centered design; many are actively adding “features” that it’s obvious no sane user would want. I’m talking about:

One example is Amazon's search results, as recently demonstrated by the Washington Post. Below is a comparison of searches for "4k tv" in 2015 (at left) and 2022 (at right), with ads highlighted in orange. What happened in the last 7 years? Is this really a product driven by what's best for users? 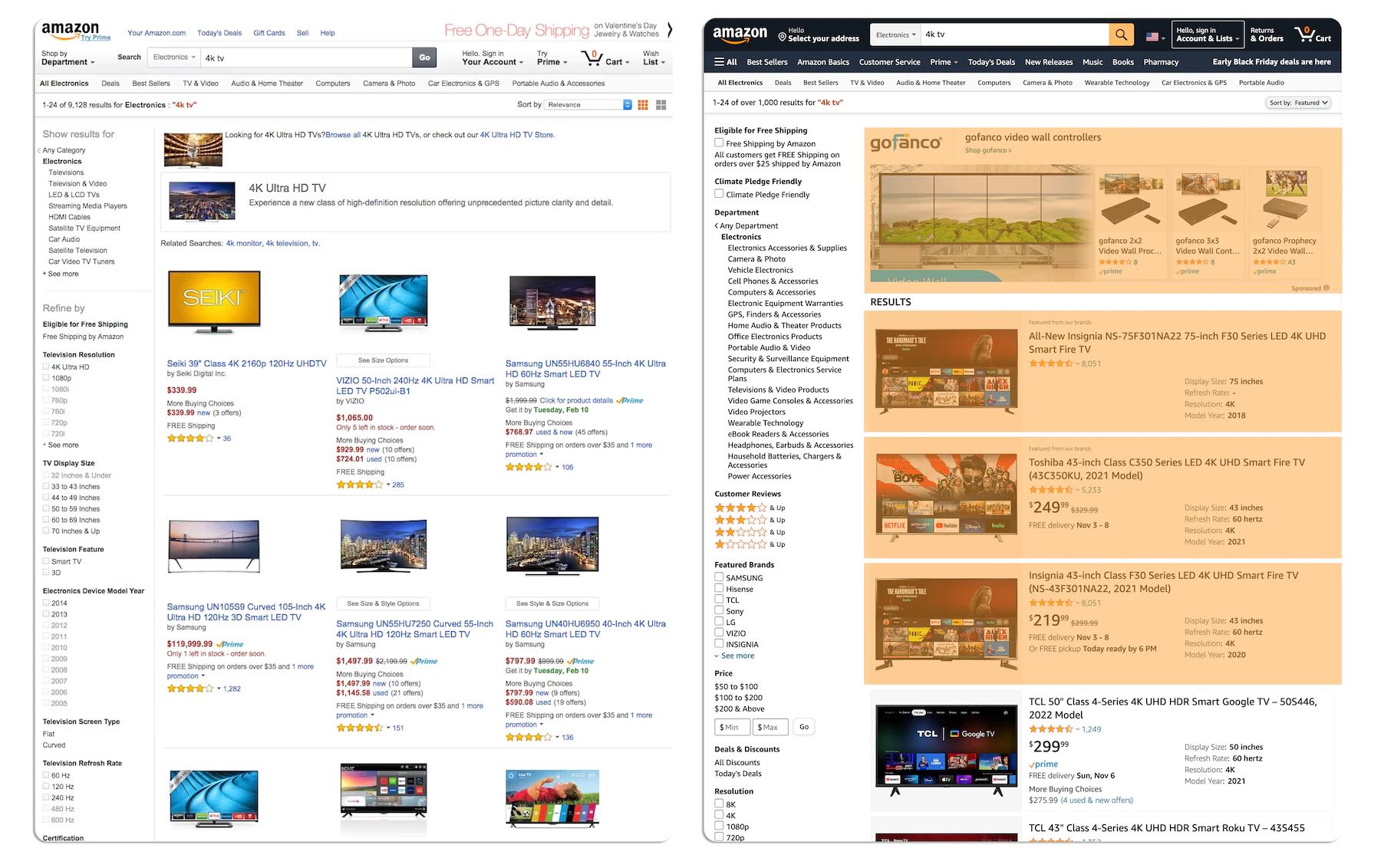 From the Washington Post: "How the Amazon search results for '4k tv' looked in 2015, left, and again in 2022, with the ads marked in orange. There were no ads visible in this much of the first results screen in 2015." (Baymard Institute/Amazon/Washington Post illustration)

If the current state of affairs is so transparently anti-user, what would truly “user-centered” products look like instead? This is my vision:

An email I received from Instagram. Why can't they just show me the latest posts in this email? Presumably because their engagement metrics wouldn't go up and they wouldn't get ad revenue.

It might sound impossible for someone to create a successful product at any sort of scale that meets the above criteria. However, I'd argue there are several successful examples of radically user-centered products out there in the world today:

If these products can make it work, why can't others?

The cost of happy users

I have tried to follow these "radically user-centered" principles with all of my side projects. So far, I have made exactly $0.00 from all of them.

The examples listed above all rely on donations and/or other community suppport. They generally rely on creators who don't seem primarily motivated by profit. While all have reached a huge scale, but most have not made very much money (with the clear exception of Wikipedia). Thibault Duplessis, who runs lichess, takes a salary of a little under $53,000 a year—presumably much less than he could make working for a large corporation.
Salary data is taken from this breakdown of lichess costs.

It's worth noting that lichess is likely worth millions to a profit-motivated buyer, so in theory Thibault could cash out. However, selling would almost certainly move the site away from today's user-centered model, so the money would come at the cost of happy users.

The truth is that radically user-centric design is much less profitable than today’s status quo. All four of the tenets I laid out above limit a company's ability to effectively monetize their products. And in the end, the most radically user-centered decision would be to give everything away for free.

For public companies, it's way too late to adopt a radically user-centered perspective. Any change that significantly reduced profits in the short-term would upset shareholders.
One example here would be JC Penney's "Fair and Square" pricing strategy. Arguably a more customer-friendly way to price their goods, the new approach led to lower sales, and eventually the CEO who led the change was forced out.

VC-backed startups are in a slightly different situation—while in growth mode, they have a lot of incentive to be as user-friendly as possible. But eventually, investors will want them to start showing a profit, and they'll have to turn to greedier methods.
For example, see the initially heavy subsidization of rides from Uber and Lyft, later followed by big price increases.

So who is left to build truly user-centered products? It seems to fall on individuals—people who build based on principle, rather than chasing the most money possible. ⧈